Woody Sez: The Life and Music of Woody Guthrie Reviews 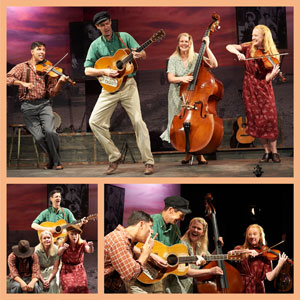 Woody Sez: The Life and Music of Woody Guthrie

Average Rating based on 2 reviews

"...The rich life and legacy of folk singer and activist extraordinaire Woody Guthrie defies easy summary, and that poses a considerable challenge for a two-hour, four-person show that claims to cover his career, at least in concept. And there is also the added problem that a surfeit of musical Americana  made up of Guthries own well-known songs  is served up along the way. Is this a musical revue or a musical? Lead actor David M. Lutken wrote Woody Sezs earnest homage in 2007 and it takes an unusual form: essentially the show calls for a one-man band with a background entourage. Narrative, via monologue, supplies biographical information in between the musical numbers; there is not much dancing or dialogue between the performers after the opening scene."

"...It is a testament to how finely crafted the show Woody Sez is that it can reintroduce a near-mythical folk singer in a way that helps his story and songs feel authentic and new once more. The show, a hybrid of a straightforward musical and a jukebox musical, walks the theatergoer through the life of Woody Guthrie, the guitarist and troubadour who came of age during the Dust Bowl era. His work spans a time when folk music began to be recognized by American critics as a true art form that chronicled hidden slices of American life. The compelling quartet of a cast in this touring production expertly guides us through formative vignettes of Guthries life, and performs selections of his songbook with heart."