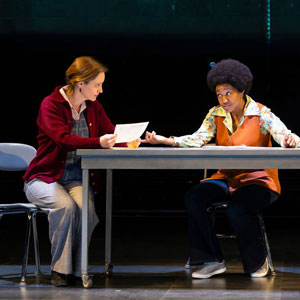 Average Rating based on 5 reviews

"...Many figures from the busing era and other periods of Boston history make appearances in "Common Ground Revisited," including Mayor Kevin H. White, fierce busing foe Louise Day Hicks, and City Councilor Thomas I. Atkins, who - in a step viewed as helping to prevent riots in Boston after the 1968 assassination of Dr. Martin Luther King - negotiates an agreement to have a concert by James Brown televised by WGBH."

"...Now a leading nonprofit theater here, arguing that the shadow of busing and the depictions in "Common Ground" continue to shape this city's reputation and its race relations, is staging a reconsideration of the book, filtered through the prism of a diverse group of contemporary artists."

"...And with such looming ills as racism and segregation, Greenidge doesn't try to offer a solution. As one character smartly says, trying to find one truth for everyone would be the biggest Big Dig ever. What she does do is offer a series of alternative endings reminiscent of the choose your own ending books. Here, the modern-day characters offer audiences the chance to decide how they want to see the world and how they might change it."

"...In short, the play packs a huge amount of history into two and a half hours. That it almost never drags is a testament to Greenidge's script, the strong cast, and Bensussen's staging, in which movement lends momentum even in moments of exposition. I did wonder if perhaps a scene or two from the past might have been cut in favor of a little more present-day perspective, but the continued relevance of these stories is clear."

"...Kirsten Greenidge's new play, Common Ground, Revisited is inspired by and based in part on J. Anthony Lukas' 1986 Pulitzer Prize-winning non-fiction book, Common Ground: A Turbulent Decade in the Lives of Three American Families. The primary focus of both texts is on class and racial tensions in Boston during the 1974 busing crisis when U.S. District Judge Arthur Garrity Jr. ordered nearly 20,000 Black and white students to be bused to/from the city's geographically segregated public schools."